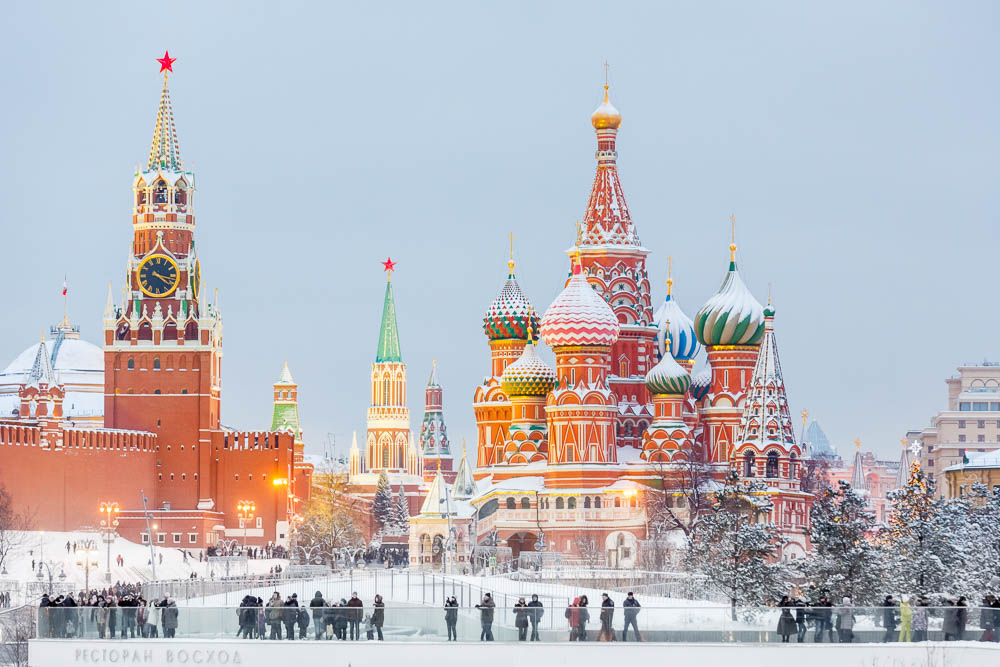 Why visit Moscow at Christmas?

Moscow, the capital of Russia, is one of the most beautiful cities in the world to photograph at Christmas. From mid-December, Moscow is dressed in its Christmas decorations. They are out of all proportion with those of the capitals I have been able to visit at this time of the year (Paris or New York for example). The city center around the Red Square is fully illuminated. Between the snow, the illuminations and the monuments, the atmosphere is simply magical.

When is the best time to photograph Moscow at Christmas?

Orthodox Christmas in Russia is not on December 25 but on January 7. During this period, all of Russia converges on Moscow to see Christmas decorations. So I advise you not to come at that time because it is crowded and the hotels are full!

Therefore, prefer the period at the end of December when the illuminations are installed. You may be able to spend New Year’s Eve in Moscow. Nevertheless, I didn’t have the opportunity to do so but it is certainly something I will realize in the future.

What are the 10 best photo spots in Moscow at Christmas?

For a weekend of three or four days it is possible to get a good overview of Moscow at Christmas with the illuminations. The 10 best photo spots I could make and I will present them to you are:

Where are the spots to be photographed ? 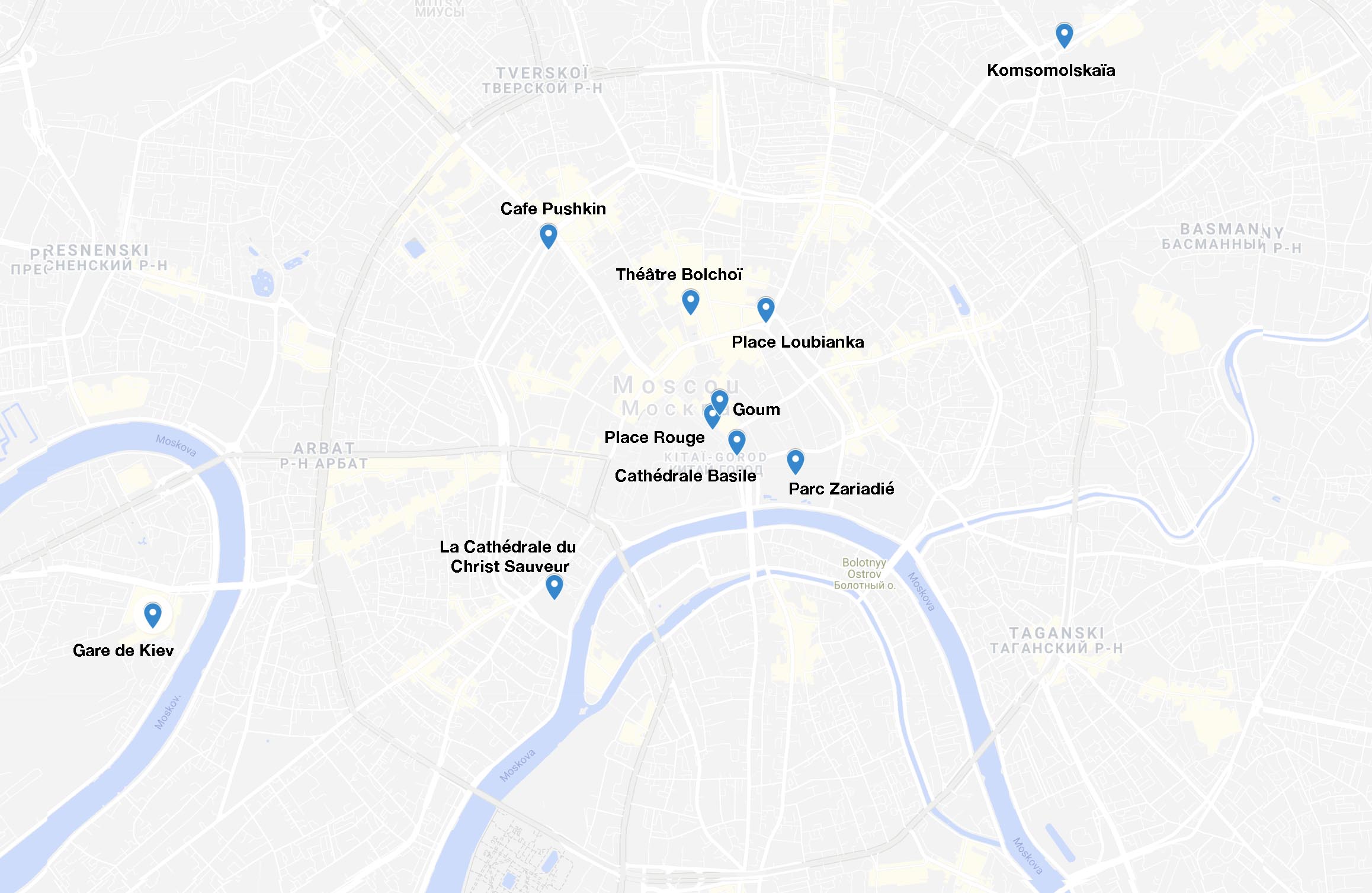 Red Square is the emblematic square of Moscow and its center. The most important monuments of Moscow can be found there. With for example the Basil the Blessed Cathedral, the Kremlin and also the department store called the Gamm.

At Christmas time, a big fair is held on the Red Square. There are merry-go-rounds for children but also for older children. Needless to say that during the school vacations, the Red Square is very busy. 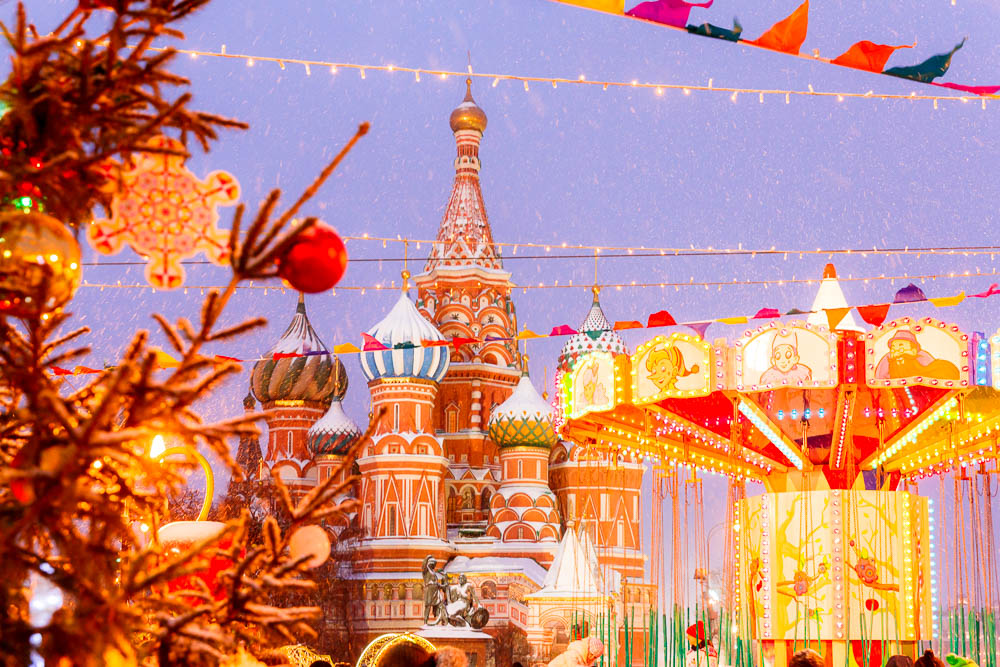 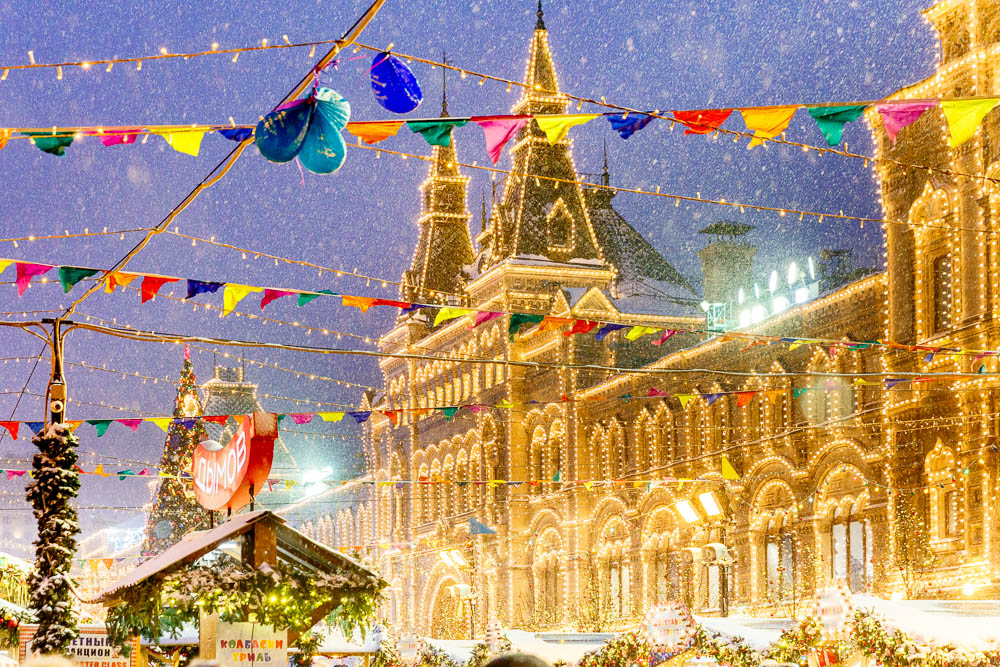 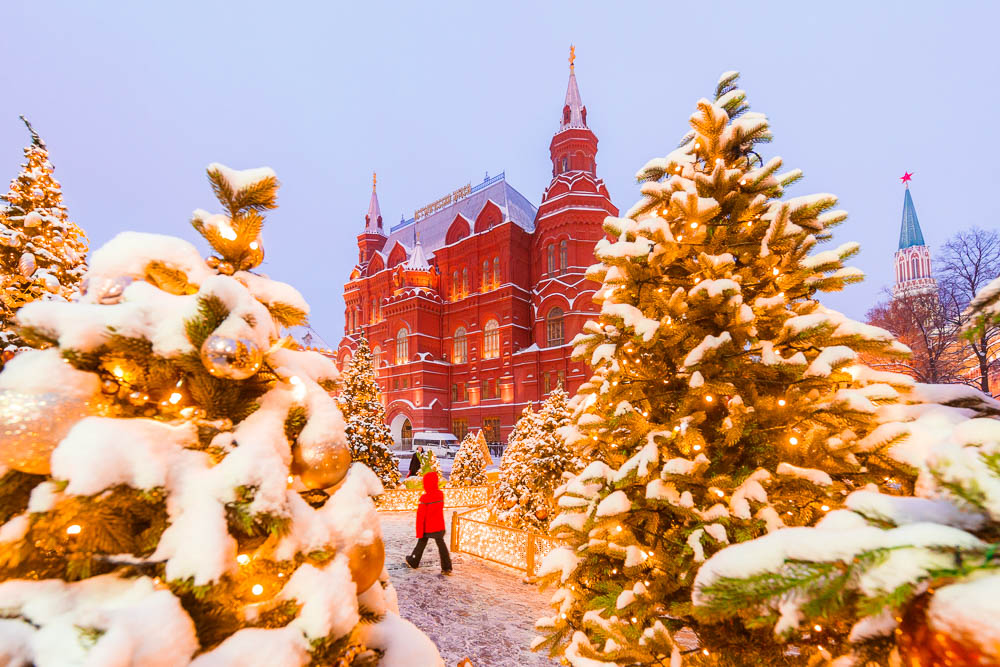 The Cathedral of St. Basil the Blessed

The Orthodox Cathedral of St. Basil the Blessed is world famous for its Russian architecture dating back to the 16th century. Located south of Red Square, it is easily recognizable by its multicolored bulbs. Moreover, it has been listed as a UNESCO world heritage site since 1990.

On Red Square, the Goum is the historic commercial center of Moscow, covered by a magnificent glass roof dating from the nineteenth century. In other words, it is the equivalent of the Galeries Lafayette in Paris with its luminous Christmas tree inside.

The streets outside are illuminated and very busy during the evening. Therefore, it is preferable to visit them before sunrise. 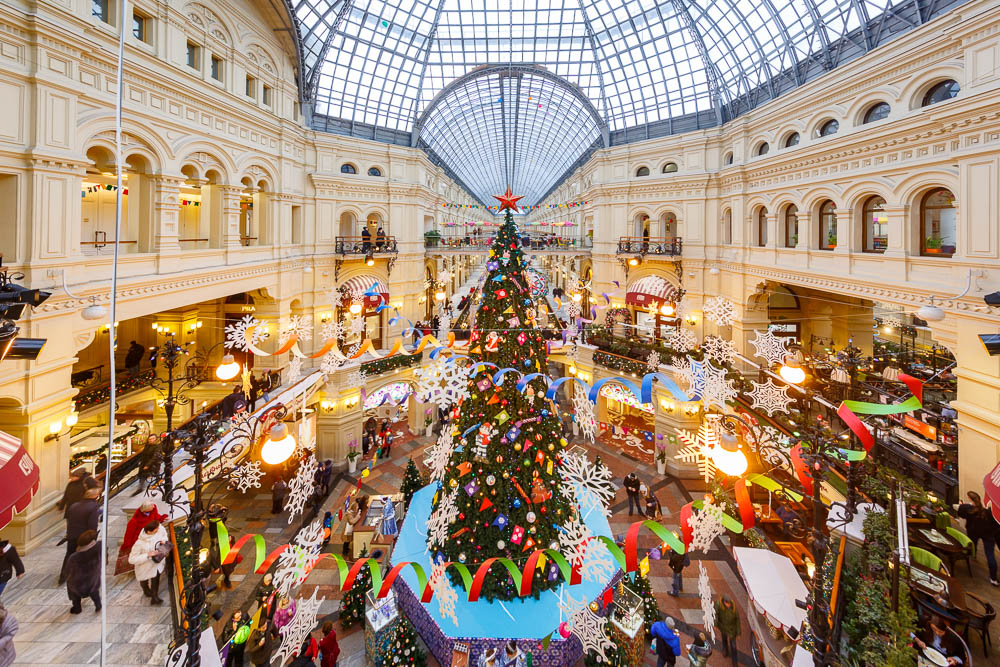 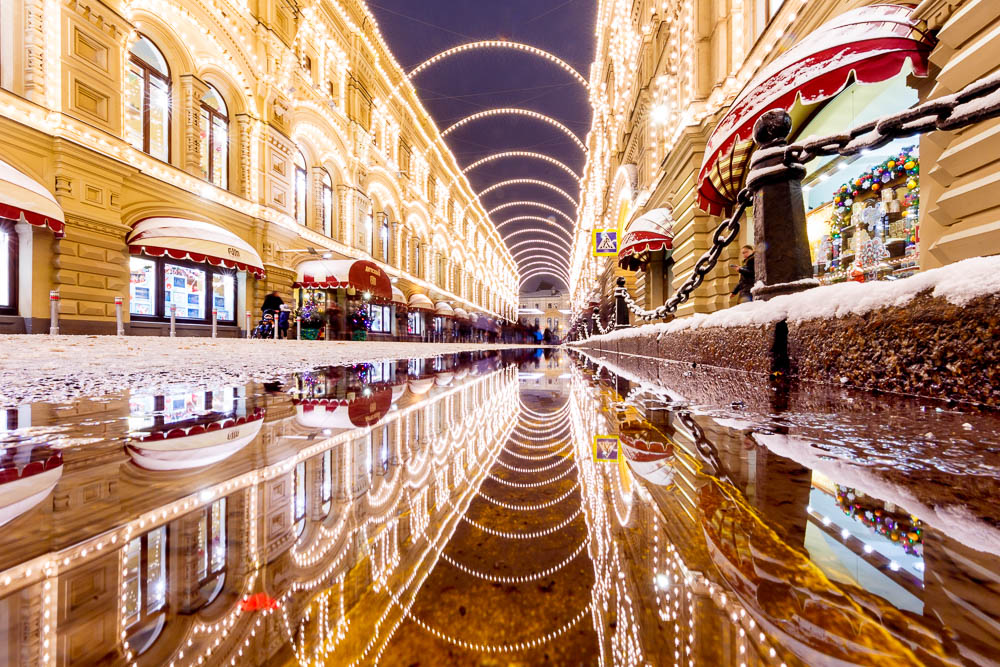 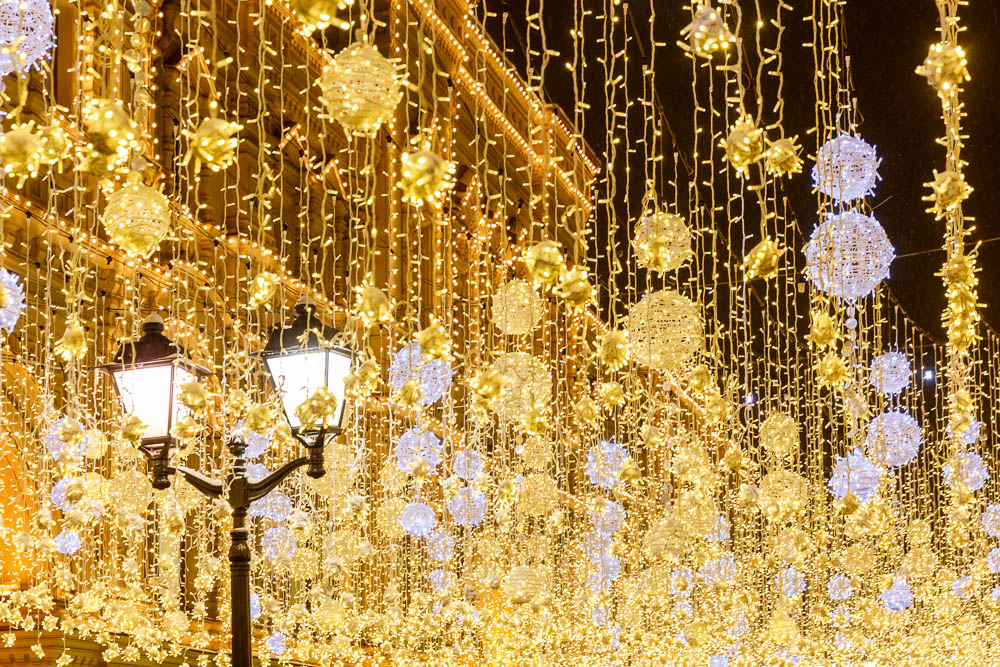 Zariadie Park is located south of Red Square, in the heart of downtown Moscow. A footbridge allows to cross the river Moskova.

Moreover, among all the places in Russia, it was included in the ranking of the 100 most beautiful places in the world in 2018 according to the American magazine Time. 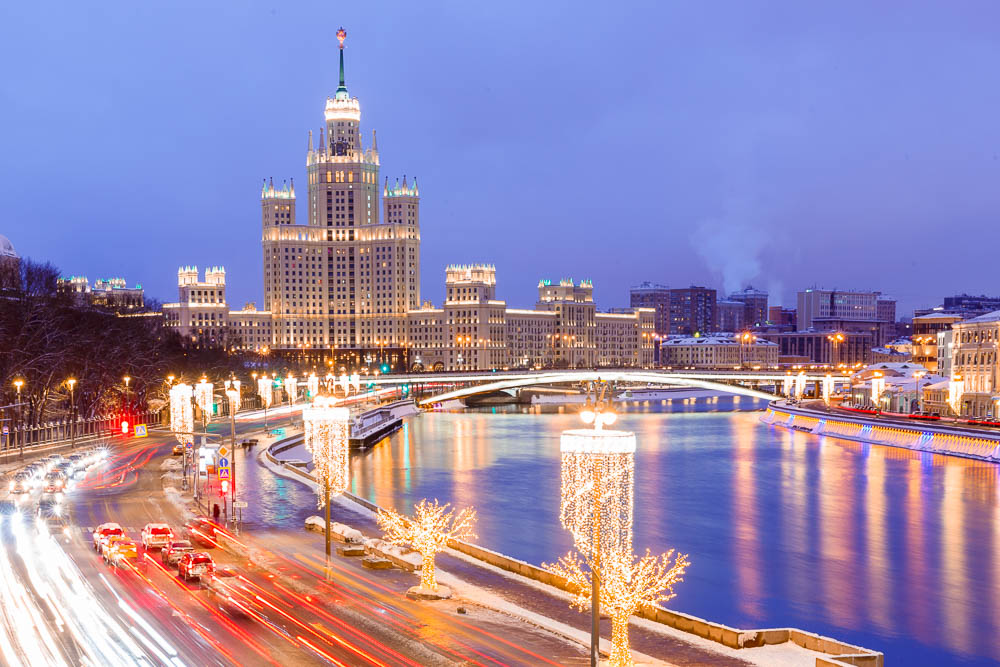 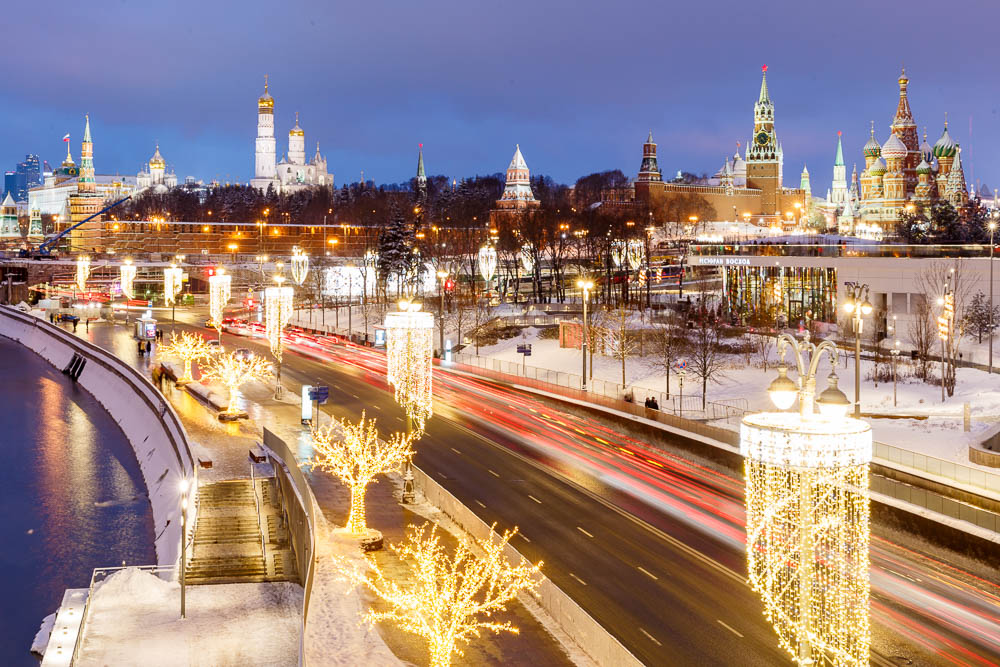 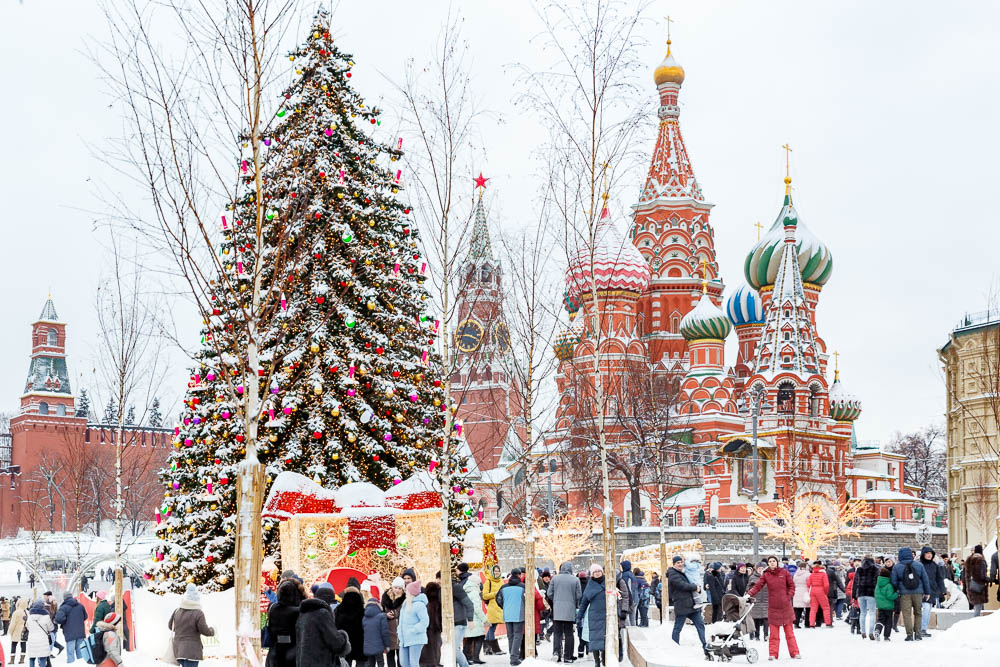 The Bolshoi Theater is one of Russia’s most important venues for both opera and ballet. The Christmas decorations in front of its facade are impressive. However, I suggest you go there early in the morning because otherwise it is crowded. 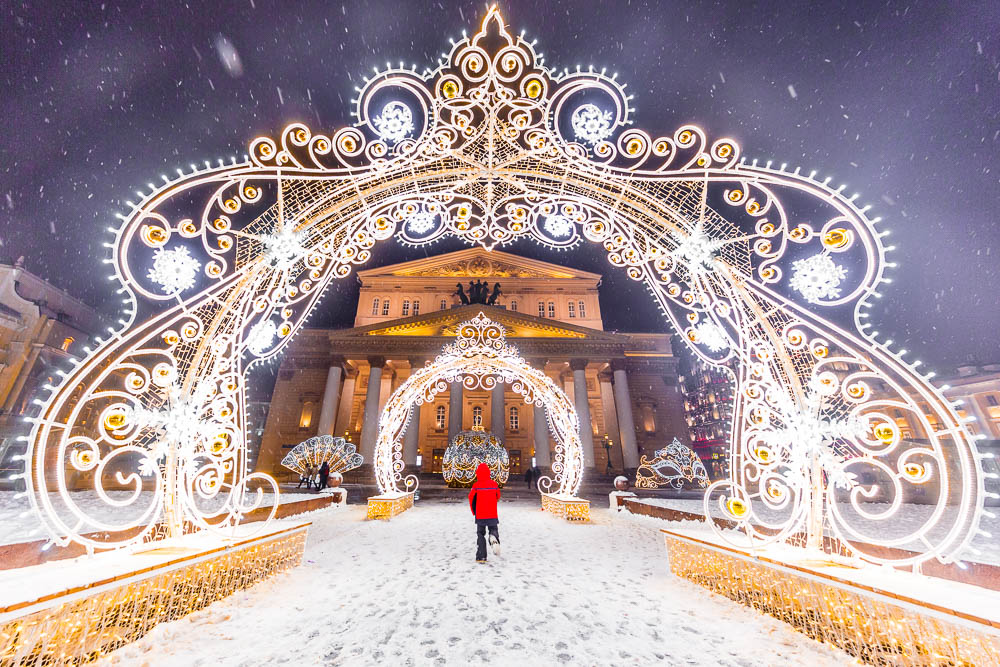 Moscow’s Lubyanka Square is located not far from Red Square. It is particularly photogenic because of its large fir tree. But beware, I strongly advise you to go there before sunrise, otherwise it is saturated. 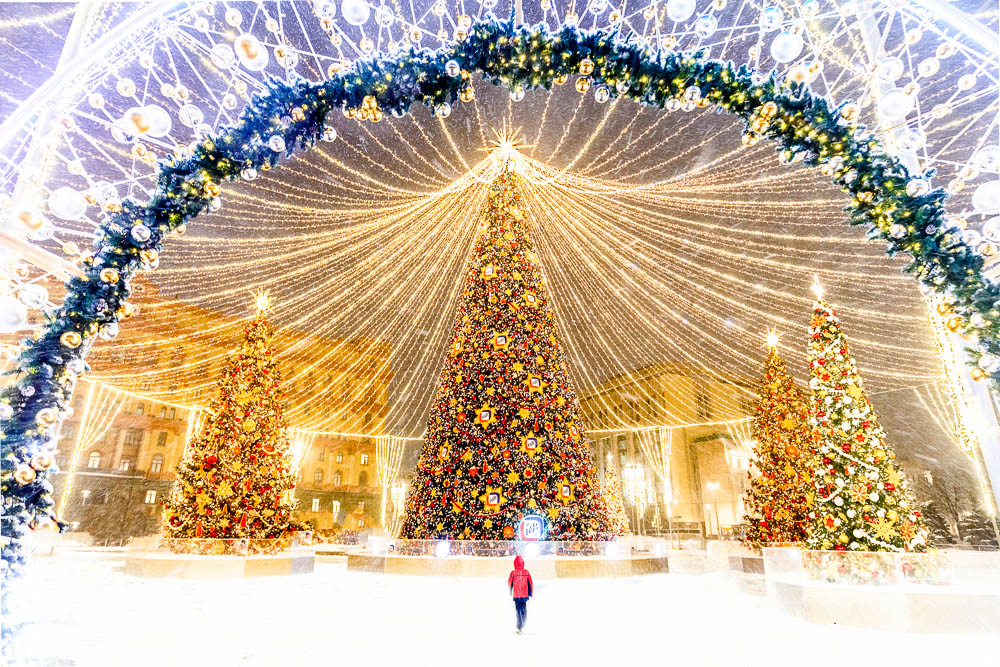 The Cathedral of Christ the Saviour

Christ the Holy Savior is the largest cathedral of the Russian Orthodox Church. It can accommodate up to 10,000 people. Indeed, it is an unmissable monument to visit, especially at Christmas time. Currently, it is now possible to climb to the top of the cathedral. To finish, you will see a panorama of the city of Moscow and the Moskova river. 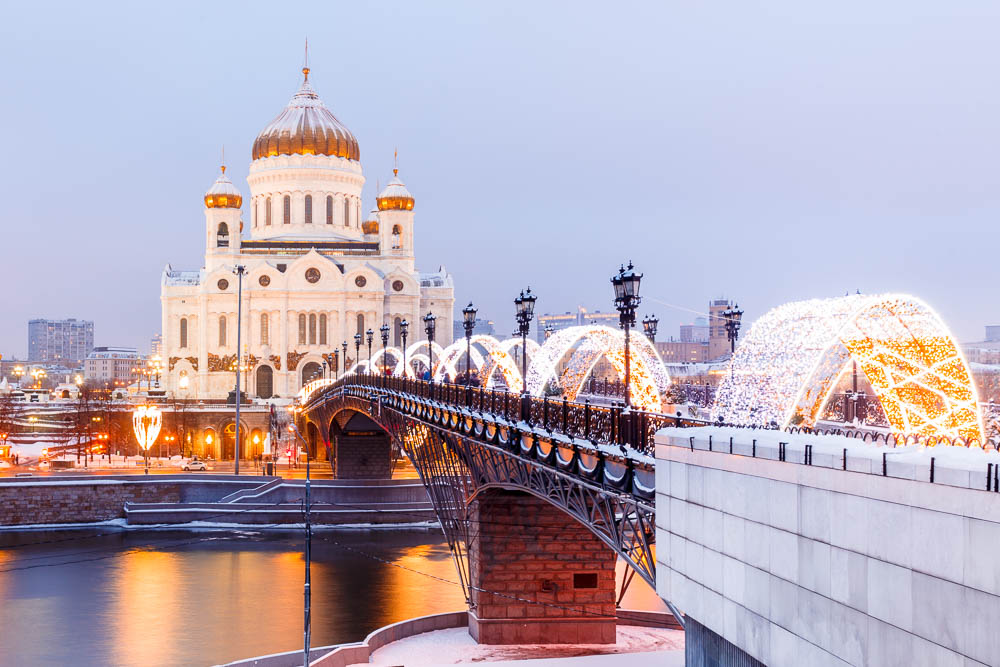 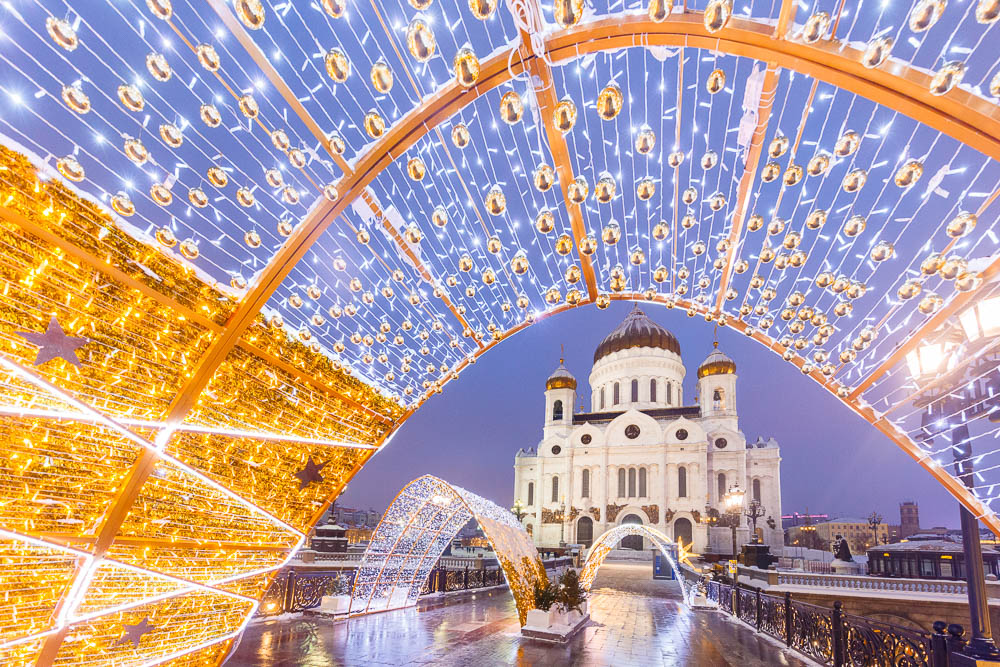 All along this Tverskoy boulevard you can stroll and admire a set of illuminations. But the most impressive one is at the Puchkin cafe. 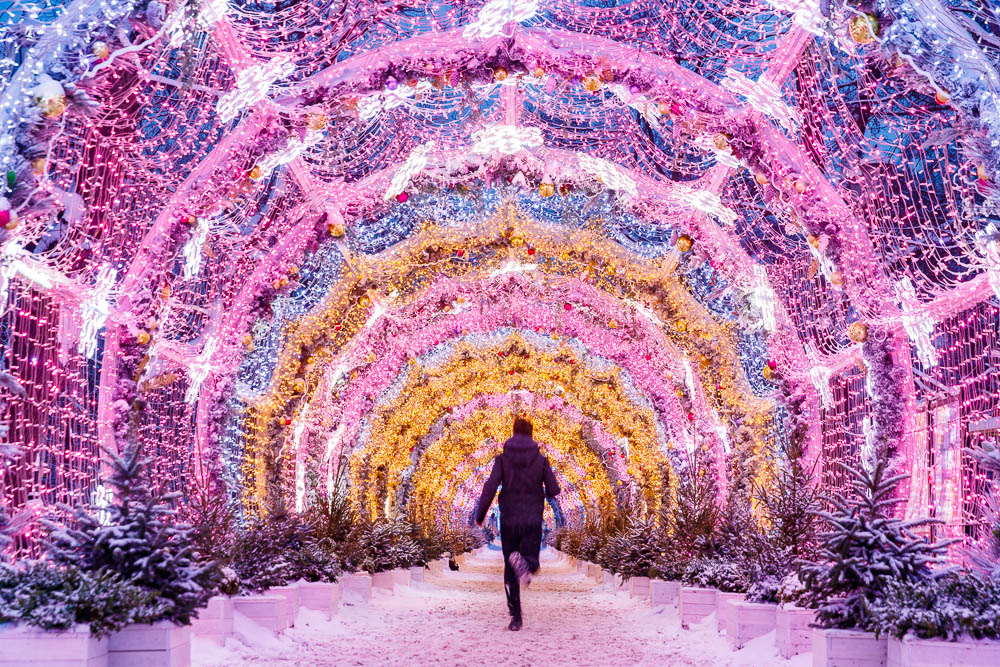 The Moscow metro is not only convenient but also a masterpiece for the eyes. Indeed, the Komsomolskaya metro station is an example of this. It was inaugurated following the Soviet victory during the Second World War. It is the most famous and photogenic of Moscow, if not of the world. Chandeliers and vaults decorate the yellow ceiling allowing visitors to discover the baroque architecture.

All in all, the Komsomolskaya station won the Grand Prix of the Brussels World Exhibition in 1958. 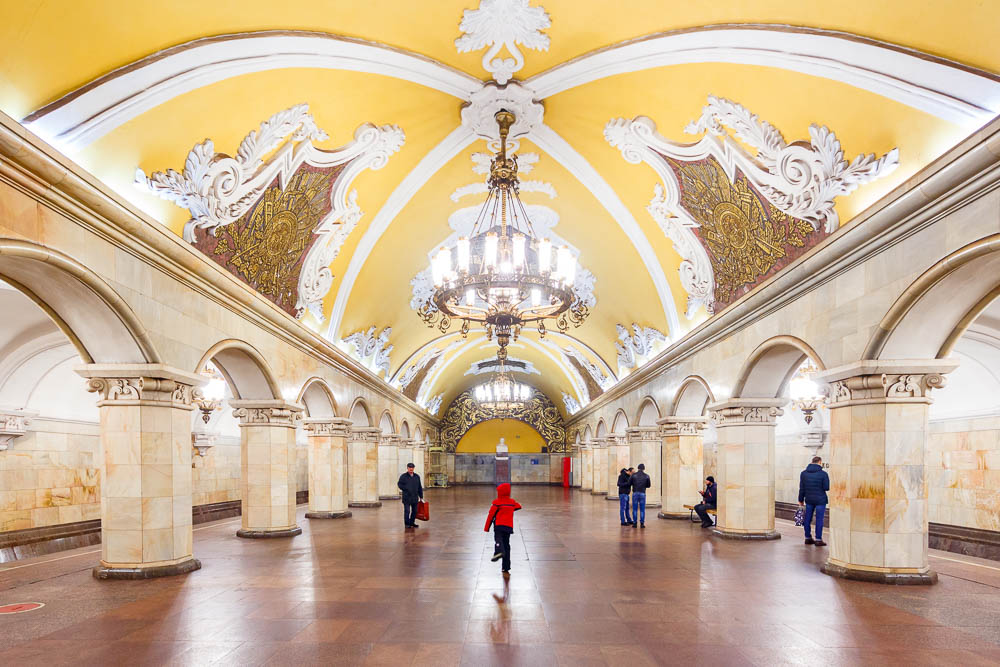 From the top of the Golden Ring Hotel in Smolenskaya, you can see a view of the Business Center (the equivalent of the La Défense district in Paris).

On this side, there is also the Foreign Ministry building in typical Stalinist style. Then, crossing the Moskva River, you will find yourself in the Kiev railway station with its impressive shopping center. 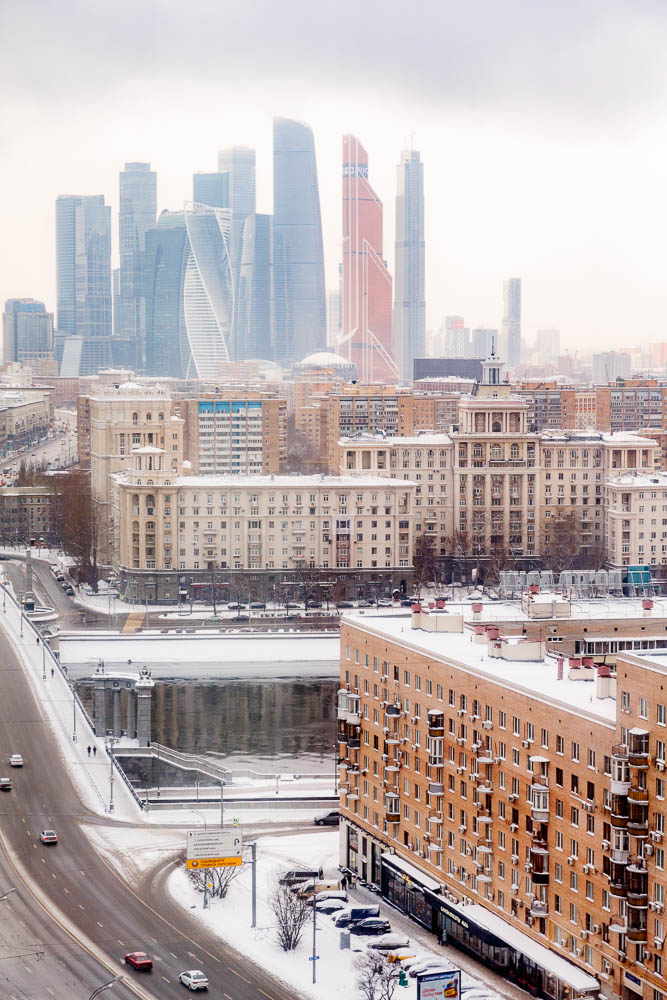